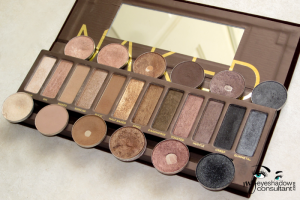 After using the Naked1 palette for a while now, I’ve come to realize how truly dupe-able it is with many of the eyeshadows found within MAC’s permanent collection.

I understand there are LE shades that may also be suitable dupes for the shades found within this palette, but I’m sticking to the permanent collection only, so these will be readily available to everyone.

If you don’t have the Naked1 palette, but you like a LOT of looks that have been done with it, then this post is for YOU!

These two are really identical in a side by side comparison, as well as the swatch. Basically, it’s a light shimmery shade suitable for the lid or highlighting or blending. I don’t really care for Shroom myself, or Virgin, (not really one for a shimmery brow!) but given the pick between the two I suppose I like Virgin better.

Again, one is VERY much like the other. This is really just a nice light pink-leaning shade that has a LOT of pigmentation, comparable in quality to its MAC dupes. Although it’s not pictured, another suitable dupe for UD’s Sin is MAC Jest.

This shade is probably my MOST favorite in the Naked palette because it provides such a neutral slate for many of the other colors found within the palette. I also feel this way about MAC Kid, and guess what?! Dupe! Identical dupe. Like Kid, Naked is also very easy to blend, apply and has a great amount of pigmentation. If you have one, you definitely don’t need the other.

UD Sidecar = MAC All That Glitters

Out of the two of these, I feel like All That Glitters is far more pigmented and much less glitter packed than Sidecar. I like Sidecar and have created some great combos with it, but the overkill of glitter Urban Decay seems to pride themselves on putting in their eyeshadows turns me off at the end of the day when it’s on my cheeks.

Nearly the same! Cork is slightly darker than Buck but both are the same in application, consistency, blendability and lasting power.

Although not exact dupes of one another, this is the closest you will come in MAC’s permanent collection. Woodwinked is slightly darker and pulls more brown, whereas Half Baked is a true golden, leaning more yellow shade. I love Half Baked and it was one of my main “convincing myself to buy it” points.

In this instance, Tempting is actually lighter than Smog by a smidge. Smog does tend to pull more glitter than Tempting. Compared side by side with one another in the pan and on the hand, these are next to near identical.

Out of the entire Naked palette, Darkhorse is the one shade that is the hardest to find an exact dupe for; in fact, there really is nothing quite like it in MAC’s collection. To get an exact color, I ended up having to mix together Mystery, Bronze and Greensmoke. Only then was I able to get a nearly identical color to Darkhorse. However, it’d probably be cheaper just to buy Darkhorse separately unless you already own all three of these MAC shades.

I don’t know about you, but when I first saw Toasted in the Naked palette I thought it was going to be more of a pink shade than what it turned out to be – a dupe for Sable. Again, I feel Sable is a tad darker than Toasted, but basically the same shade color, consistency and formula wise.

Satin Taupe is a little bit lighter than Hustle, but it makes for a really great replacement for this gray-leaning neutral shade. Hustle is very pigmented and easy to work with, much like Satin Taupe. If you are a MAC lover, Satin Taupe should already be a permanent fixture in your collection! 🙂

Creep is really nothing more than a black shade with a subtle amount of silver glitter added into the formula, a true dupe for Black Tied. Between the two of these, I like Black Tied MUCH more and actually will go out of my way to use it in place of Creep if I want to add black to a look. Why? Black Tied is MUCH more pigmented than Creep and I find Creep fades quickly throughout the day, whereas Black Tied holds its power long and strong!

Completely identical in color, but I feel there is a difference in consistency between these two. Gunmetal is richer in pigmentation and “thicker” in color, if that makes sense. I feel like I need to build Knight Divine when I apply it, whereas Gunmetal just applies so nicely in one swipe. Between these two, I actually prefer Gunmetal.