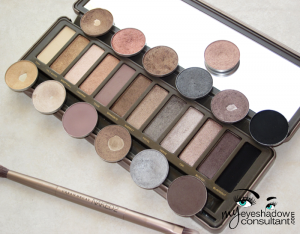 If you enjoyed the UD Naked1 MAC Dupes post, you more than likely were looking forward to this one – me too!

I will say I found Naked2 much harder to find exact dupes for within MAC’s permanent collection. Again, I am not using LE shades as I don’t feel that’s fair for those who don’t own them. If there are LE shades that are dupes, I will mention them, but they will not be the main comparative examples used here.

Unfortunately, to get more “exact” and true dupes for the Naked2, I found myself doing a LOT more mixing of shades. You can get there, but it will require some mixing and matching to achieve it. Please also keep in mind UD has a LOT more glitter in their shades, so some of the formulas are not an exact match. For many of you who aren’t fans of glitter that may actually be a sigh of relief! Ha! Anyway, here we go!

Foxy is a matte, yellow-leaning shade; the closest you’ll find to it in MAC’s permanent collection is Ricepaper. Ricepaper does have sheen to it, so it isn’t an exact dupe formulation-wise. Color-wise the two are nearly identical though. If you’re looking for a closer dupe, limited edition shade Femme Fi would be one to consider.

Although not exact dupes of one another, this is the closest you will come in MAC’s permanent collection. Woodwinked is slightly darker and pulls more brown, whereas Half Baked is a true golden, leaning more yellow shade. I love Half Baked and it was one of my main “convincing myself to buy it” points. 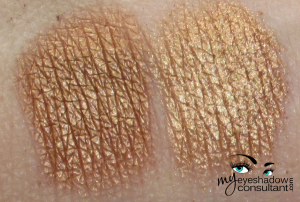 Bootycall is identical to Shroom, and it’s also important to note that it is a dupe for Virgin from the Naked1 palette. Despite the name, this is a great shade for blending out many of the shades within this palette. Although, a light hand and a small amount really do go a long way. If you apply too much, like Shroom, the combination can turn muddy and look unblended.

Chopper is another one of those UD shades that simply does NOT have an exact dupe in MAC’s collection. Some compare it to All That Glitters, but it leans more pink/orange. The closest I came is Mythology. As you can see in the swatch, they are not identical, but using one in place of the other would allow you to achieve a similar look. And Mythology is very close in glitter content to Chopper.

Dupes! Dupes. Tease is a matte purple shade that is exactly the same as MAC’s Quarry. Neither is better than the other. I find both of these incredibly easy to work with, blend out, etc. Tease probably is one of my most favorite shades in the Naked2 palette.

Snakebite is another unique shade to Urban Decay with no exact dupe to be found in MAC’s collection. The closest shade I could find to it was Tempting, although it’s a touch lighter and has more glitter than Snakebite.


Suspect is a beautiful light champagne shade with a little bit of glitter in the formula. Again, there is nothing quite like this completely dupeable within MAC. Patina is a very close match in terms of color, but I still adore Suspect for its uniqueness.


Pistol has been compared to MAC Smoke and Diamonds. I did a comparison myself and found it to be a very good dupe for Pistol. However, if you don’t have it and cannot get your hands on it, mixing Knight Divine and All That Glitters would produce a VERY close match.


Like Pistol, I found I had to mix together two MAC eyeshadows again to get a really close dupe. Electra and All That Glitters are perfect beside Verve and it’s hard to tell the two apart at all.


YDK is very similar to Verve, which made me question why Urban Decay included it in this palette to begin with. Using All That Glitters again, I found that layering it over Satin Taupe produced an exact dupe to YDK. I feel like YDK is ‘shinier’ in real life though, almost metallic looking.

Busted appears purple in the palette but is really a dark brown shade with purple tones. Its counterpart in MAC Mystery is next to near hard to discern in the swatches below. It took me a while to figure out a dupe that compared well to Busted, but Mystery fits the bill.

Black shades – really, who can tell the difference? Ha! Blackout is really nothing more than MAC Carbon. However, I prefer working with Blackout over Carbon. I find it easier to blend and the pigmentation to be more powerful and longer lasting than Carbon. Still, if you’re looking for a dupe for Blackout, Carbon is a great match.