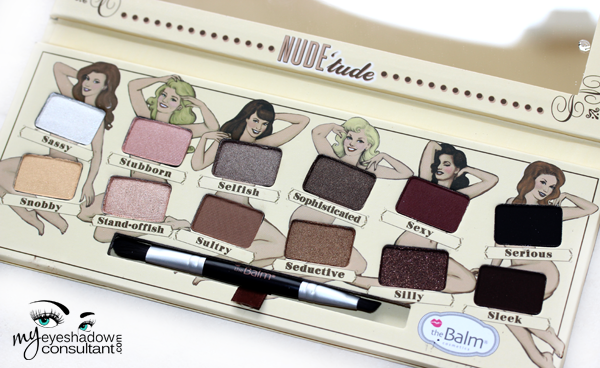 Several friends here have been raving about TheBalm’s Nude Tude palette and asked if I would be adding looks for it onto the site. With as many great things that I kept hearing about it, it was only natural for it to get its own post! 😉 After using it a few times this past week, honestly, I’m only semi-impressed by it.

What you see in the below swatches are how the eyeshadows SHOULD appear on the lid, and several of them do transfer well. However, there are a good many that lack great pigmentation and also had quite a bit of fallout during application and throughout the day. I was most least impressed with: Silly, Sleek, Selfish and Stubborn. Poor pigmentation, no real lasting power, quite disappointing. Despite those four, the other eyeshadows in the palette were pretty good and didn’t give me the troubles these four did.

Click here to see the dupes for this palette.

All better! Thank you for the well wishes, everyone!