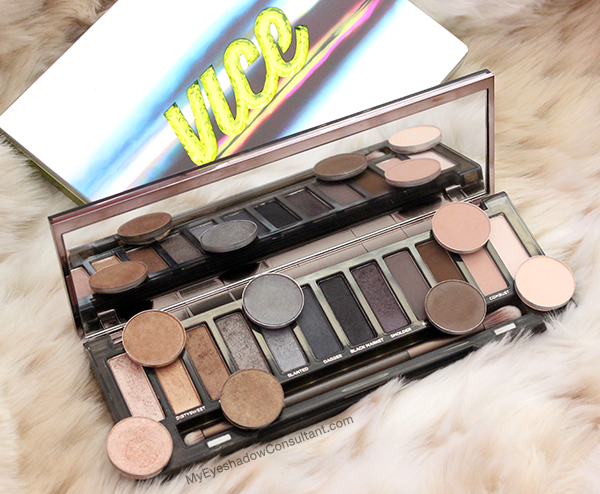 When I first picked up Urban Decay’s latest ‘Naked’ addition, I thought this was going to be a very easy palette to dupe out. While some of the shades were very easy to dupe, others proved to be a little bit more difficult! Therefore, in today’s post, I’m providing some substitutions you can use in place of the more unique shades in this palette. They’re not identical, but they’re close enough that if you used them in place of the UD eyeshadows in a look, you’d get very similar results. The good news is if you already have UD’s Vice 3 palette from last year, you already have some of the eyeshadows in the Naked Smoky palette. 😉

My favorite eyeshadow in the palette! Urban Decay describes it as a “champagne shimmer” with fabulous, but subtle warm undertones. I found limited edition eyeshadow, MAC Grand Entrance to be the closest to it in terms of color and almost in the finish; UD’s Last Sin from the Vice 3 palette was also VERY close. You could also use MAC’s All That Glitters as a substitution for High.

It’s a medium bronze shade with warm undertones and a metallic sheen. I compared this to several shades before finding its dupe in MAC’s Woodwinked. To me, it was real hard to tell the difference between the two in the swatches.

This is not a new shade for Urban Decay, and if you own the Vice 2 palette, you already have this shade. Described as a “metallic taupe with iridescent micro-glitter”, the closest dupe I found from MAC is Go. I did compare Radar with MAC’s Tempting, but found Tempting to have more orange undertones by comparison. Radar is slightly more purple-looking in the swatch (in person) compared with Go, but it’d be hard to tell on the eyes.

Armor is one of the more unique shades in the palette, and was the hardest to dupe out. It’s a metallic silver taupe with glitter. If you look to the Vice3 palette, Angel is very close in finish, but the color is lighter, whereas Urban Decay’s Mushroom is very close in color, but not a match in the finish. I also read elsewhere online that TheBalm’s ‘Selfish’ from the Nude Tude palette is pretty close in terms of color, but not in finish.

A light metallic gray and probably the easiest one to dupe out of the entire palette, I found its twin in MAC’s Silver Ring. If you study the two side by side, Slanted is a tinge darker and has some deeper blue tones. However, they are so similar that one could be used in place of the other in a look.

Another troublesome one to dupe out! I don’t normally like blue eyeshadows for myself, so I really don’t buy them. Which stinks for duping eyeshadows exactly like this one! It’s described as a “medium charcoal with micro shimmer” even though I don’t see any shimmer in the formula and it’s more of a matte to me than anything else. The only shade I could find even remotely close to it is Revolver from the Vice3 palette. Same color (almost!) but the finish is different. Revolver has more sheen, whereas Dagger is a true matte finish.

A jet black satin with cool undertones and a sheen, this is not your run of the mill black shade, so it was a little harder to dupe. If you have the LORAC MegaPRO Palette from 2014, Caviar is a close match, but not identical. Honestly though, I feel like you could use any black in its place; it’s not one of those shades that is particularly special or unique, in my opinion.

This eyeshadow disappointed me the most in palette because it looks purple in the pan, but applies as a purple-black, with more black than purple. Trying to find a comparable shade was challenging; the closest substitution I could find was in LORAC’s Pro Palette with the eyeshadow ‘Deep Purple’. I love Deep Purple and feel like Smolder should have been more like the LORAC eyeshadow anyway, so it’s a great one to use in its place, even if you already have the Naked Smoky palette!

This is a cool matte taupe shade and does have an exact dupe in Urban Decay’s Defy from the Vice3 palette. Comparatively speaking, you could use MAC’s Copperplate or LORAC’s Cool Gray in its place to create a similar look, but they are not identically matching in color (color difference shown below).

Described as a rich matte brown, Whiskey is one of those Urban Decay eyeshadows that looks SO much more different in the pan than in the swatch or on the eyes! By just looking at it, it’s hard to tell what you can use in its place, but once I swatched it, I immediately thought of MAC’s Concrete, and it is a dead ringer. Identical finish and color with this dupe.

Combust is defined as a soft pink taupe and I originally wanted to compare it to MAC’s Malt, almost immediately. Unfortunately, Malt is much more pink than Combust and MAC’s Kid is too warm, lacking the taupe tones in this eyeshadow. Urban Decay’s Undone is also much too pink to be considered a dupe. However, if you’re not picky about the shades being identical, you could use either Malt or Undone in place of Combust for similar results.

This is described as a light beige eyeshadow and can be compared to a variety of different eyeshadows. I found MAC’s Vanilla to be a very close dupe to it, although I did notice Thirteen does have gray undertones when compared with Vanilla. I also compared it to UD’s Strange, which somehow was a closer match than Vanilla, but I feel you could use either of these in its place.

Have you found dupes for this palette, too? Share yours below!