How many eyeshadows do you own?

How many are collecting dust because you’re not sure which eyeshadows to pair them with?

My Eyeshadow Consultant provides a picture library of easy-to-replicate combinations using eyeshadows from popular brands like MAC, Urban Decay, Too Faced, LORAC, etc. Taking the guesswork out of pairing eyeshadows together has never been easier and it’s here that you can discover new colors and try new combinations to enhance your beauty.

My Eyeshadow Consultant began in 2010, when founder, Zabrena, first discovered MAC eyeshadows and quickly became overwhelmed at the vast array of colors that were offered. She began documenting eyeshadow combinations with pictures for her personal reference on a private website. Shortly thereafter, her friends learned about what she was doing and wanted access to the pictures, and the idea went viral.

Since its inception, My Eyeshadow Consultant has grown into a helpful resource for women of all ages in over 190 countries across the globe and continues to inspire women daily to try new looks and colors they might not have thought about wearing before.

About My Eyeshadow Consultant Founder, Zabrena 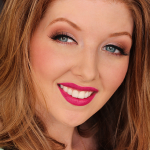 In her “downtime” she enjoys antique shopping, gourmet cooking and spending time with her husband and their kitty, Mikko. Zabrena and her husband also own and operate an eyelash line called Inky Minky Lashes. It was named for their Maine Coon Inky, who sadly passed away April 2016.